In 2009 Carson Taylor Wheet prepared a Bachelor’s Thesis for the University of Arizona, USA. Her thesis investigates the Order of the Knights Templar by examining the varied phenomena that led to the formation of the Order in the early twelfth century and its dissolution nearly two hundred years later. 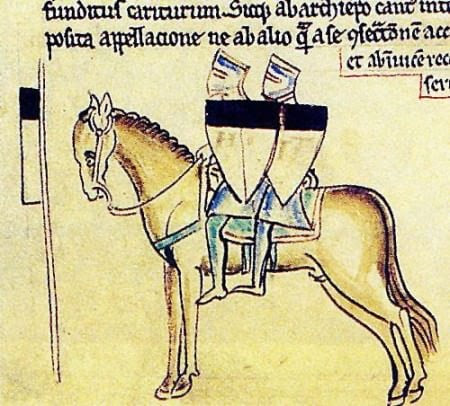 Since the demise of the Order has recently received a great deal of attention in both historical scholarship and popular culture, the author analyzes and critiques numerous theories concerning the trial of the Templars. She contextualizes it by revealing the causes for the Order’s creation. An array of primary and secondary sources was used to explain why each event occurred despite being unpopular with a significant portion of Christian officials.

The author ultimately contends that most of the aforementioned theories are insufficient to explain the rise and fall of the Order because they fail to grasp the complexity of each event. The Templars’ creation resulted from a lengthy theological justification for a unique form of Christian holy war, papal ambitions, and a palpable ethos of fear and violence within Christendom that was redirected against an external enemy. Their demise stemmed from secular ambitions, relative papal weakness, and a unique blend of social fears, legal standards, and organizational rules that proved extremely deleterious in their trial.

Godfrey of Saint-Omer (also known as Gaufred, Godefroi, or Godfrey de St Omer, Saint Omer) was a French knight, one of the founding members of the Knights Templar.
He is said to have come from the family of the Lords of Saint-Omer, France, possibly the son of William I, Lord of Saint Omer and Melisende de Piquigny. William and Melisende were known to have at least one son, Hugh.

Both William and Hugh participated in the First Crusade as vassals of Robert II of Flanders. Hugh of Saint-Omer was also mentioned as one of the best knights in the Kingdom of Jerusalem which was established after the conquest op Jerusalem in 1099.

There are conflicting reports as to Godfrey's relationship to William and Hugh. Chronologically Godfrey may have been Hugh's brother but it is also said that he was Hugo's son. On the list of crusaders, a Gauthier de Saint-Omer is listed, which could be a mistake for Gaufred (Gauthier de Saint-Omer was not yet born). Therefore Godfrey probably came to Jerusalem with William I and Hugh around 1099, so during the First Crusade.

The lineage of the Saint Omer family is described in detail here.