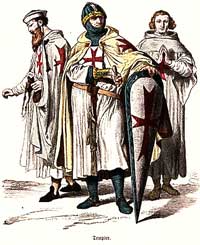 The militarization of the Hospitallers, mid 12th century

"Gerard, a native of Provence, was at this period (start of the 12th century; TN) at the head of the society (of the Hospital of St. John; TN), with the title of “Guardian of the Poor.”

He was succeeded (A.D. 1118) by Raymond Dupuy, a knight of Dauphiné, who drew up a series of rules for the direction and government of his brethren. In these rules no traces are discoverable of the military spirit which afterwards animated the order of the Hospital of St. John.

The Abbé de Vertot, from a desire perhaps to pay court to the Order of Malta, carries back the assumption of arms by the Hospitallers to the year 1119, and describes them as fiercely engaged under the command of Raymond Dupuy, in the battle fought between the Christians and Dol de Kuvin, Sultan of Damascus; but none of the historians of the period make any mention whatever of the Hospitallers in that action. De Vertot quotes no authority in support of his statement, and it appears to be a mere fiction.

The first authentic notice of an intention on the part of the Hospitallers to occupy themselves with military matters, occurs in the bull of Pope Innocent the Second, dated A.D. 1130. This bull is addressed to the archbishops, bishops, and clergy of the church universal, and informs them that the Hospitallers then retained, at their own expense, a body of horsemen and foot soldiers, to defend the pilgrims in going to and in returning from the holy places; the pope observes that the funds of the hospital were insufficient to enable them effectually to fulfil the pious and holy task, and he exhorts the archbishops, bishops, and clergy, to minister to the necessities of the order out of their abundant property. The Hospitallers consequently at this period had resolved to add the task of protecting to that of tending and relieving pilgrims.

A from 1168, after the failed expedition to Egypt in which te Hospitallers participated (whereas the Templars refused to do so), however, the character of the order of the Hospital of St. John was entirely changed; the Hospitallers appear henceforth as a great military body; their superior styles himself Master, and leads in person the brethren into the field of battle. Attendance upon the poor and the sick still continued, indeed, one of the duties of the fraternity, but it must have been feebly exercised amid the clash of arms and the excitement of war. "