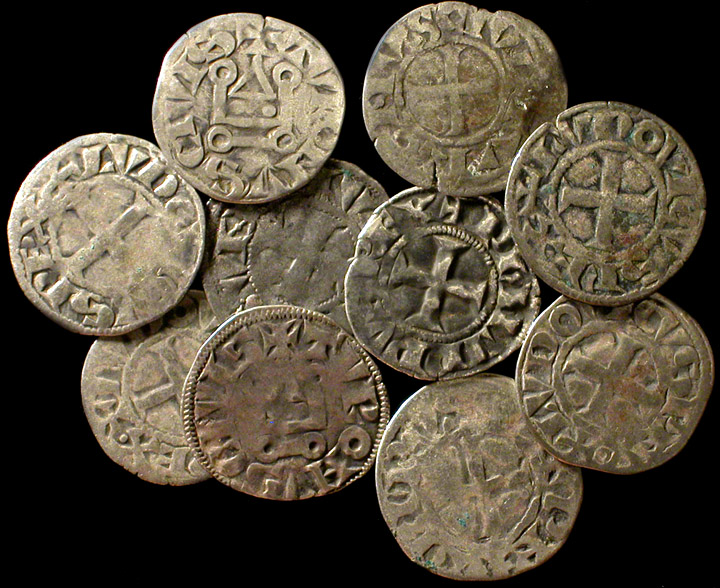 
"Despite their extensive possessions, the Templars and Hospitallers were always claiming to be poverty- stricken. They sent out alms-collectors on a regular basis, to collect money from lay-people and clergy for their work in the Holy Land. Matthew Paris was probably expressing a widely-felt discontent when he wrote around 1245: "The Templars and Hospitallers receive so much income from the whole of Christendom, and, only for defending the Holy Land, swallow down such great revenues as if they sink them into the gulf of the abyss ..." Whatever did they do with all their wealth? Some Europeans concluded that they must be using their resources very inefficiently...

The charge that the Order of the Temple encouraged the brothers to acquire property fraudulently and to win profit by all possible means clearly reflects these complaints against the Templars and Hospitallers. For at least 150 years contemporaries had accused the military orders of lying and cheating because of their greed for wealth. In 1312 the same old criticisms against the Hospitallers arose again at the Council of Vienne, as the pope planned to bestow on them the former property of the Templars.

Interestingly, no critic before 1300 accused the Templars of immorality. In the mid-thirteenth century an English poet, writing in Anglo-Norman French, surveyed the whole of society and accused most of the clergy of womanising, even dropping hints about the Hospitallers. But he exempted the Templars, who were too busy making money to have time for sex: "The Templars are most doughty men and they certainly know how to look after themselves, but they love pennies too much; when prices are high they sell their wheat instead of giving it to their dependants."..."

"In fact, the clearest evidence that the Templars were not all they seemed is largely unknown, even among Templar experts. But it is potentially extraordinarily important. It takes the form of an original Templar building, still standing, nestled in a quiet corner of green countryside. Inside, it contains an enigma that may yet cause experts to revisit the entire question of the Templars’ religious beliefs.  It is not Rosslyn Chapel in Scotland, which has no Templar connections at all, having been built a century and a half after the Order was suppressed. Instead, it is a small mid-12th-century chapel in the village of Montsaunès, set in the foothills of the French Pyrenees, on one of the principal medieval highways leading from France into Spain.... Montsaunès was on a strategic defensive line. Surviving medieval charters prove beyond doubt that the chapel was unquestionably built by the Templars, then occupied and maintained by the Order for 150 years. It was the heart of one the Order’s great European commanderies (fortified monasteries), although nothing else of it survives.

The reason for its importance to the question of Templar spirituality is immediately apparent the moment you enter the ancient building. The whole interior is painted, as most medieval churches and cathedrals were. But the Templars’ chosen decorations for this particular chapel were not saints, bible scenes, and the usual range of religious imagery. The surviving frescoes are a bizarre collection of stars and wheels, rolling around the walls and ceiling in some mysterious, unfathomable pattern. Interspersed among them are also grids and chequer-boards, painted with equal precision – but also with no apparent sense or meaning. There is nothing remotely Christian about it. The overall effect is calendrical and astrological, with a whiff of the Qabbalistic. It is like some strange hermetic temple, whose meaning is obscured to all except initiates.

The conclusion of the few experts in medieval art who have looked at the frescoes is that they are unlike anything else they have ever seen. They are "unknown esoteric decoration". Anyone studying the startling paintings quickly realises that they transcend the small French commune where they remain unnoticed, 850 years on. They demand answers. What did they mean to the Knights Templar? Why did they paint them so meticulously? And what prompted them to put them in their chapel, the building at the heart of their spiritual life, which they entered to pray in nine times a day?

We simply do not know the answers. But the chapel at Montsaunès is proof, in its own enigmatic way, that the religious life of the Templars was not as straightforward as we have perhaps come to believe.... The little-known chapel at Montsaunès reminds us that there is much we still do not know about the Templars, who increasingly baffle us the more we discover about them."

View this video on Montsaunès Chappel.

Text and illusatration from a publication by Dominic Selwood on December 19th, 2013.

"However, criticism arose which tended to fluctuate with events. During a crusade, while crusaders wrote home with accounts of the military orders' courage and self-sacrifice, criticism was overlooked. Between crusades, as Europeans received news of territorial losses to the Muslims, they forgot the military orders' heroism and concluded that these defeats were God's punishment for sin. For surely God would not allow godly men to suffer such set backs...

Chroniclers tended to be critical, for they wished to draw a moral from contemporary events for the edification of future generations. In other forms of literature, romance, epic or farce, the Templars, Hospitallers and Teutonic Knights appeared as brave knights of Christ combating the Muslim menace, or as helpers of lovers, or as good monks. It is interesting that although monks and parish priests came under heavy criticism for their immorality in the 'fables' or farces, the military orders were not criticised. Obviously they were not regarded as womanisers.

Between the Second and Third Crusades of 1148-49 and 1189, the generous donations of money and privileges to the Templars and Hospitallers became a major cause of resentment. This was hardly surprising. All religious orders aroused complaints about their privileges, and the Templars and Hospitallers never attracted such severe criticism as the Cistercians and friars."

"In October 1307, by order of Philip IV of France, all the Knights Templar within the French domains were arrested. In November, Pope Clement V sent out orders for the arrest of the Templars throughout Europe. The brothers were accused of a variety of crimes, which were said to be long-established in the order... During the trial of the Templars witnesses claimed that the order's abuses had been notorious far many years and under interrogation, including torture, many brothers confessed to at least some of these crimes. In March 1312, Pope Clement dissolved the Order of' the Temple, giving its property of the Order of the Hospital, and assigning the surviving brothers to other religious orders. Despite this, the question of the order's guilt has never been settled. Just what were the accusations made against the Templars before 1300, and were these related to the trial? What did contemporaries think about the other military orders, such as the Knights Hospitaller and the Teutonic Knights?

The Order of the Temple was a military order, a type of religious order....The concept of the military order was a natural development from the concept of the crusade. Rather than taking up weapons for a short period to defend Christ's people, the members of a military order did so for life. In return, they expected to receive pardon for their sins and immediate entry into heaven if they died in action against the enemies of their faith.

In western Europe, far from the battlefield, some of the clergy were doubtful whether a military order could be a valid religious order. Around 1150, the Abbot of Cluny wrote to Pope Eugenius III that he and many of his monks regarded the brothers of the Temple as only knights, not monks, and believed that fighting the Muslims overseas was less important than suppressing bandits at home. Letters written to encourage the early Templars also hint at this sort of opposition. But the bulk of the surviving evidence is warmly in praise of the Templars, and clergy and knightly classes alike welcomed the new order with generous donations. In fact the Hospital of St John seems to have attracted more donations as it became more of a military order. By 1200 the military orders had become part of the religious establishment and criticism of the concept ceased. "

The Crusades: not anti-Muslim but to stop internal Christian violence?

"A key area where historians focus their attention on the crusades is as the origin of the religious conflict between Islam and Christianity. This is problematic for two key reasons.

First, it was not the first time European Christian soldiers fought Islamic opponents, as that was begun by the Almoravid invasion of Spain in the eighth century and continued well past the crusades. The Iberian conflict influenced Europe in significant ways, but it was not an overwhelming obsession, showing that Europe as a whole was not driven by any sort of desire to stamp out Islam as a rival religion.

The second problem with portraying the crusades as the beginning of religious animosity between Islam and Christianity is that this view puts the motivation of the war squarely in the differences in the two belief systems. When looking at the writings of the day, men like Pope Urban and Bernard never refer to any specific belief espoused by Islam, simply labeling their enemies as pagans or infidels. It is important that this point is emphasized. At no time did any Pope in the decades prior to the crusade, or even Bernard after the crusade, focus their energy on the Muslim nations."

"... The specifics of the Islamic religion was not the reason behind their attacks, but rather the simple fact that they were not Christian, thus fighting them was not seen in the same way as fighting and killing fellow Christians. This may seem like a rather self-serving idea, but it was a simple way to mitigate violence between the people of the church, tell them to fight those not under the protection of God. This is a callous turn of phrase, but it does emphasize that the target of the crusades was not chosen for their specific religious beliefs, but rather that they simply were not Christian, which shows the focus of the crusade was not an anti-Muslim holy war, but a move to stop violence between Christians."

source text: "Bernard of Clairvaux and the Knights Templar: The New Knighthood as a Solution to Violence in Christianity" by Nicholas A.Boysel (2009); illustration source
No comments:

Pictures of the 2014 Jacques de Molay Event in Paris, presented by ordo-balliolensis.eu