The origin of The Knights Templar through early 11th century eyes

In his Masters Thesis (2009) Nicholas A. Boysel elaborates on the Knights Templar as the New Knighthood which was a solution to violence in Christianity.This blog quotes freely from this work.

Few scholars have approached the Knights Templar from the beginning, examining their creation in terms of where the order originates and why it was created. This makes this area largely unique and untouched, and the motivation of Bernard of Clairvaux’s (the founder of the Cistercian Order) for helping form the order has been largely overlooked.

Viewing the order’s origin with its ending in mind is in a sense anachronistic, as it can taint what the historian sees as motives for the order with what the order evolved into. Examining the original charters and rules of the order, the fact that it would later become a massively wealthy and powerful organization was never even conceived of, let alone set out as any sort of goal for the order. The order at its ending was virtually unrecognizable from its much more humble roots.

Another interpretation of the creation of the order assumes that it was a natural progression of the contemporary attitude toward the crusade. It is sometimes argued that the crusades were a logical manifestation of the society of the eleventh and twelfth centuries, and that the order was a simple evolution of that sentiment. This idea ignores the fact that the speech given by Pope Urban II was viewed with total astonishment by his contemporaries, igniting a new idea of redemption in the knights.

Assuming that the eventual creation of several orders means that the idea was common before they were created is not taking the original motivations into account, or the mindset of the first founders. Looking at the words of Bernard in his "Praise of the New Knighthood" and the length of time needed for the founders of the order, Hugh and Godfrey, actually to receive papal support for their order suggests that the church had no idea how to handle such a unique idea. It took the eloquence of men like Bernard and Peter the Venerable of Cluny to make the idea more palatable for the church authorities, and even then the order did not in any way become a sort of standard form of knighthood.

source: "Bernard of Clairvaux and the Knights Templar: The New Knighthood as a Solution to Violence in Christianity" by Nicholas A.Boysel (2009)


Gathering of Order of the Knights Templar

On Saturday September 4, 2011, 130 Knights of the Order of the Temple, men as well as women, gathered at Saint John's Cathedral (at Den Bosch, the Netherlands). It was the yearly meeting of the order, which this time took place in The Netherlands. At St John's mass was consecrated and during the Investiture 10 kandidates were knighted. There was a moment of contemplation and all present sang, in their own language, "Thine be the Glory". Afterwards the knights posed on the St. John's square for a ceremonial photograph.

Pope Innocent III founded the Order of the Templars in 1112. The Pope gave the first nine knights the name Knighthood of God". The purpose of the order was to protect pilgrims who were on their way to the Höly Land, now Israël. It was the time of the Crusaders. Den Bosch also has a local Commandery, as they say, that of St. Norbert. 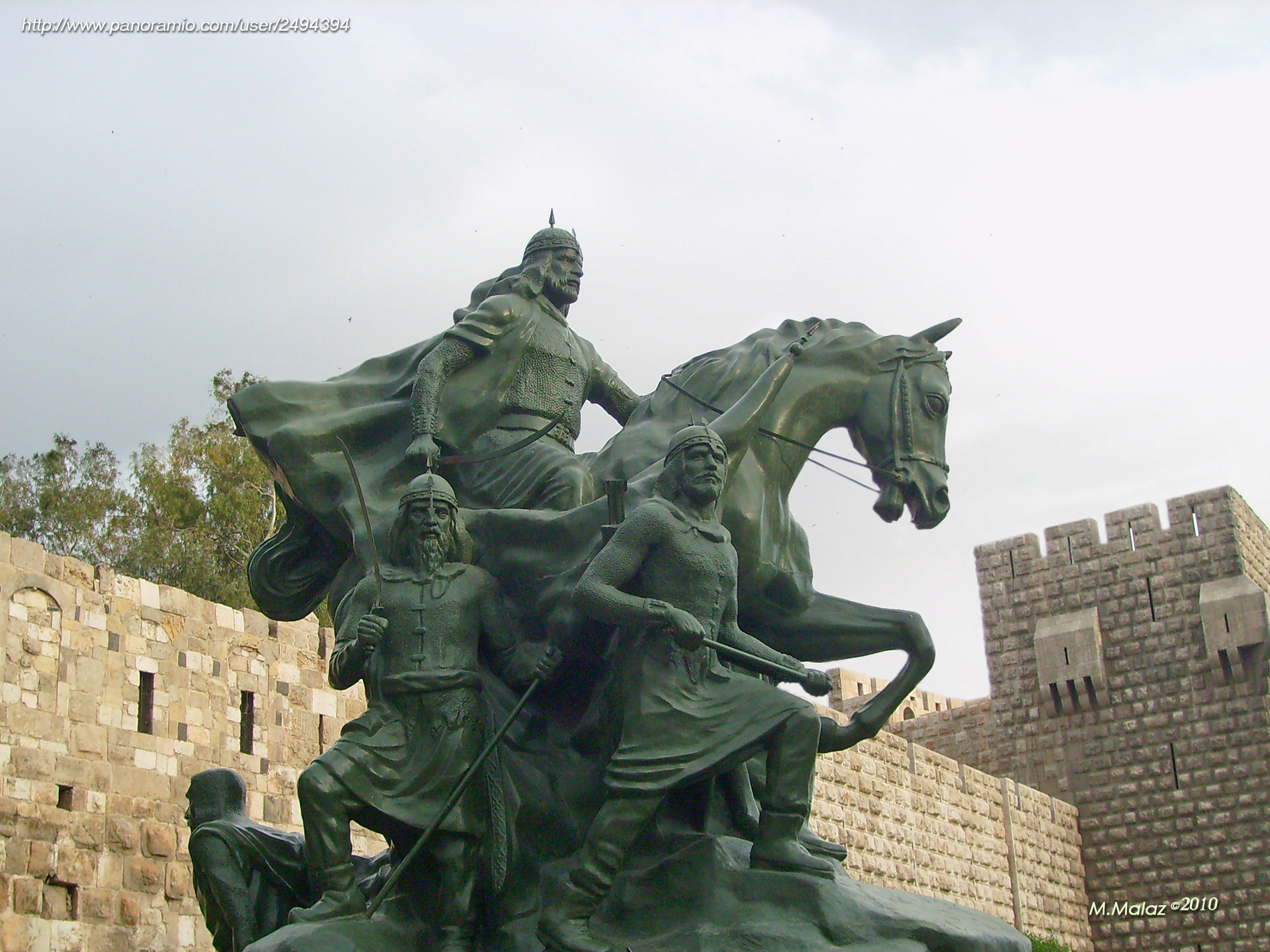 "The Second Crusade (1145-49) had put a great deal of the Holy Land under European rule, but Saladin (Salah ad-Din Yusuf ibn Ayyub, 1138-1193) had re-conquered much of that territory, prompting several kings of Europe to agree to another crusade. The Third Crusade (1189-92) was unsuccessful in putting the Holy Land under Western European control. It did, however, open up a dialogue between the east and west in unforeseen ways.

The death of Henry II put the English troops under the command of Richard the Lionhearted. Richard ... joined King Philip of France and Leopold V of Austria, who were embroiled in the two-year-long Siege of Acre. Richard's siege machines started destroying the walls. The residents of Acre sent appeals to Saladin to help them, but he could not defeat the Europeans. Acre had no choice but to surrender. Richard was to deal with Saladin and establish a treaty after Acre.

Richard and Saladin showed great mutual respect for each other's military prowess. A temporary halt to hostilities was declared so they could come to terms.  At one point, when Richard became ill, Saladin sent him fruit that was chilled with snow brought from the mountains, and offered his personal physician. Also, Saladin sent two horses as replacements for Richard's.

An attempt was made to join East and West by the marriage of Richard's sister, Joan (1165-1199), to Saladin's brother, Al-Adil (1145-1218), who was currently administrator of Egypt. Joan had been married to King William II of Sicily, but he had died in 1189; later she would become Countess of Toulouse by her marriage to Raymond VI. The plan was for Jerusalem to be their wedding gift, and would therefore pass into the hands of a dynasty that joined Western Europe (or, at least, England!) to the Muslim world. Negotiations fell through, however.

The two commanders did agree on a three-year truce. In summer 1192, the Treaty of Ramla determined that Jerusalem would remain under Muslim control, but Christians would be allowed safe passage. Also, the Crusaders would give up lands they had invaded except for a narrow coastal strip that extended from Tyre to Jaffa. Neither leader was wholly pleased, but each had reason to wish a swift end to the conflict. Richard had troubles at home due to his brother John. Saladin was losing control of his army because of his failure to re-take Acre or to route Richard's forces in their many engagements.

Saladin died of yellow fever in 1193. While his heirs fought over the succession, Western Europe was told tales of Saladin's military prowess and chivalrous actions toward the invaders. There is an anecdote that, in April 1191, a Frankish woman on pilgrimage had her baby stolen and sold into slavery. According to Saladin's biographer, Saladin bought the baby back with his own money and returned it to the mother, then ordered a horse to take her back to her camp. Poems were written in praise of him. Richard declared him the greatest leader in the Islamic world.

And the punchline? All the negotiations and gifts between Richard and Saladin were made by proxies. The two men who so praised and respected each other never met face-to-face."

Slightly adapted from two blogs on the subject by Tim Shaw (2012). dailymedieval.blogspot.com; Illustration from this source

The Knights Templar, a solution to violence in Christianity - quotes

In his Masters Thesis (2009) Nicholas A. Boysel elaborates on the Knights Templar as the New Knighthood which was a solution to violence in Christianity. This blog quotes freely from this work.

"This thesis examines the origins of the crusader ideology and how the Knights Templar were formed from this mindset. Using writings from Bernard of Clairvaux and other religious and secular writers of the time, this thesis examines how the crusades were originally meant to redeem Europe from its violent nature, not to extend that violence. In this way, the crusades were intended to be a military pilgrimage of penance for the men who participated, a way of channeling the evil of their violence into a godly purpose. It was this idea that Bernard latched onto when he aided in the forming of the Templar order.

The duty of a knight was to kill his enemies and fight in the name of his lord. The duty of a Christian was to love his neighbor as himself, and to turn the other cheek when confronted with aggression. This basic contradiction was a conflict that the people of medieval Europe had a very difficult time resolving, be they men in arms or intellectuals.

Over the centuries, there were many attempts to justify either the way of the knight, or to condemn this manner of living as sinful and evil. When Bernard, abbot of Clairvaux (1090-1153) in the Cistercian order and noted scholar, was asked to write about the newly formed knights Templar, he went out of his way to condemn the normal life of the knightly class of his time, while exalting the idea of knights who fought for God alone. In this new order, Bernard saw a way of escaping the evils of the military life, and a worthy aim that would not only further the cause of the Church and of God, but would also serve as a way of redemption for the many sinful soldiers that would enter the order."

source: "Bernard of Clairvaux and the Knights Templar: The New Knighthood as a Solution to Violence in Christianity" by Nicholas A.Boysel (2009)
No comments: