In the course of the 11th century the works of Euclid and Archimedes, lost in the West, were translated from Arabic to Latin in Spain. The modern Hindu-Arabic numerals, including a notation for zero, were developed by Hindu mathematicians in the 5th and 6th centuries. Muslim mathematicians learned of it in the 7th century and added a notation for decimal fractions in the 9th and 10th centuries. Around 1000, Gerbert of Aurillac (later Pope Sylvester II, c. 946 – 12 May 1003) made an abacus with counters engraved with Hindu-Arabic numbers. A treatise by Al-Khwārizmī on how to perform calculations with these numerals was translated into Latin in Spain in the 12th century.

Direct knowledge of islamic religion and belief gained strong momentum whith the activities of Petrus Venerabilis (“ Peter the Venerable”, c. 1092 – December 25, 1156), abbot of the Benedictine abbey of Cluny, Burgundy. He is well known for collecting sources on and writing about Islam. He took a long sabbatical journey to Spain to study with Islamic scholars of all ranks and published the first Latin edition of the Koran. His Talmudic contributions are tenuous and still under scrutiny.

Peter's true brilliance came to light between 1138-1142, especially after his translation of the Koran became required reading to the entire Benedictine world and for all preachers of the crusades. A proponent of studying Islam based upon its own sources, he commissioned a comprehensive translation of Islamic source material, and in 1142 he traveled to Spain where he met his translators.

The Arabic manuscripts which Peter had translated may have been obtained in Toledo, which was an important centre for translation from the Arabic. The project translated a number of texts relating to Islam (known collectively as the "corpus toletanum"). They include the Apology of al-Kindi; and most importantly the first-ever translation into Latin of the Arabic Qur'an (the "Lex Mahumet pseudoprophete") for which Robert of Ketton was the main translator. Peter of Toledo is credited for planning and annotating the collection, and Peter of Poitiers (Peter the Venerable's secretary) helped to polish the final Latin version. The team also included Robert of Ketton's friend Herman of Carinthia and a Muslim called Mohammed. The translation was completed in either June or July 1143. With this translation, the West had for the first time an instrument for the serious study of Islam.

Peter used the newly translated material in his own writings on Islam, of which the most important are the Summa totius heresis Saracenorum (The Summary of the Entire Heresy of the Saracens) and the Liber contra sectam sive heresim Saracenorum (The Refutation of the Sect or Heresy of the Saracens). In these works Peter portrays Islam as a Christian heresy that approaches paganism.

While his interpretation of Islam was basically negative, it did manage in setting out a more reasoned approach to Islam through using its own sources rather than those produced by the hyperactive imagination of some earlier Western Christian writers. 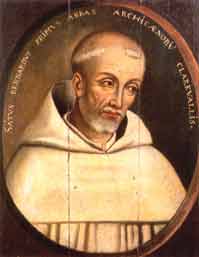 The ninth centenary of Bernard de Fontaine’s entry into the Abbey of Cîteaux (1112 or 1113?) is celebrated during the Vocations Year 2012-2013. After founding Clairvaux Abbey in 1115 Bernard became better known as Bernard de Clairvaux, the spiritual leader of the Cistercian Order and (after 1127) of the Order of the Knights Templar.

A Hebrew school of great importance, directed by the highest rabbinical authorities and attended by numerous students from various lands, especially Germany and France, flourished at Troyes in the twelfth century. Several synods whose ordinances were adopted in foreign countries assembled at Troyes about 1160.

Among the most noted scholars of the city were jewish scolars of which Rashi is the best known. The name Rashi was an acronym from his full name RAbbi SHlomo Itzhaki. Rashi (February 22, 1040 – July 13, 1104), was a medieval French rabbi and long highly esteemed as a major contribution Ashkenazi Jewry gave to Torah study. Rashi lived during the reigns of two local noblemen: Thibaud I who took part in the Norman invasion of England in 1066 and Hughes I, the first Earl of Champagne, well known protector of  the Cistercian reform of the Benedictine Order and of the Order of the Knights Templar.

The Jews also depended on the protection of the Earls and their quarter stood in the shadow of the chateau. They were regarded an important source of revenue, because they owned vineyards and other real estate. Therefore effort was taken to safeguard and sustain this source of income. At the end of the twelfth century and at the beginning of the thirteenth the Earls of Champagne and the King of France entered into an agreement by which the contracting parties bound themselves to surrender to each other all Jews who should quit the domains of the one and settle in the territories of the other. In 1204 all rights over the Jews who settled in Ervy were waived by the Seigneur d'Ervy in favor of Countess Blanche of Troyes; and in 1222 Thibaud, Count of Champagne, acknowledged the receipt for 160 livres given by the Jews of the city to Jacob, "Master of the Jews of Troyes."

The Jewish scolars were also highly regarded on matters of the old Hebrew books and consulted by local christian scolars. The Benedctine Siegbert of Gembloux, teaching at Metz about 1070, consulted with Jewish scholars with a view to establishing a more authentic text for his Latin translation of the Septuagint. The Cistercian Nicholas Maniacoria of Trois-Fontaines (Champagne region), although a Hebraist, likewise consulted the rabbis. He produced his own revision of the Bible based on the Paris text (although the original is lost), with the program of removing additions (especially from the Old Testament) and restoring original readings and arbitrarily deleted texts. In his Libe/us de corruptione et correptione Psalmorum, written about 1145, he also questions the principle that the longer text is automatically better.

Stephen Harding, first abbot of Citeaux and as such founder of the Cistercian order, made the first revision of the Cistercian Breviary in an attempt to clean up corruptions that had crept into Medieval chant. He also produced a new translation of the Vulgate by consulting the most ancient texts available and by conferring with rabbis on the trickier points of some Hebrew passages. The Stephen Harding Bible is considered a treasure of illumination and shows the workmanship that made the scriptorium of Citeaux famous in its early days before complex illumination was curtailed under the influence of Bernard de Clairvaux.