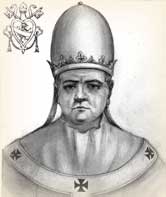 Pope Saint Celestine V (1215 – 19 May 1296), was born Pietro Angelerio to parents Angelo Angelerio and Maria Leone in a town called Sant'Angelo Limosano, in the Kingdom of Sicilia (Sicily). He became a Benedictine monk at Faifoli in the Diocese of Benevento when he was 17. He showed an extraordinary disposition toward asceticism and solitude, and in 1239 retired to a solitary cavern on the mountain Morrone, hence his second name Pietro di Morrone.

In 1244 he left this retreat, and went with two companions to a similar cave on the Mountain of Maiella in the Abruzzi region of central Italy, where he lived as strictly as possible according to the example of St. John the Baptist. There he founded the order subsequently named after him, the Celestines. Pietro gave them a rule formulated in accordance with his own practices. In 1264 the new institution was approved by Urban IV. In 1274 the than pope Gregory reapprove his order, formally making it a branch of the Benedictines and following the rule of Saint Benedict, but adding to it additional severities and privations. The Celestines saw a rapid spread and Pietro lived to see himself "Superior-General" to thirty-six monasteries and more than six hundred monks. As Pietro had seen his new order thus consolidated he gave up the government of it to a certain Robert, and retired once again to a still more remote solitude to give himself up more entirely to solitary penance and prayer.

After the death of Pope Nicholas IV in April 1292 the cardinals assembled at Perugia. After more than two years, a consensus had still not been reached. Pietro, after sending the cardinals a letter warning them that divine vengeance would fall upon them if they did not quickly elect a pope, was himself elected pope on July 5, 1294. Pietro obstinately refused to accept the papacy, and even tried to flee, until he was finally persuaded by a deputation of cardinals accompanied by the kings of Naples and Hungary. He was crowned at Santa Maria di Collemaggio in the city of Aquila in 29 August 1294, taking the name Celestine V.

With no political experience, Celestine proved to be an especially weak and incompetent pope. Realizing his lack of authority, he consulted with Cardinal Benedetto Caetani (his eventual successor) about the possibility of resignation. This resulted in one final decree declaring the right of resignation, which he promptly exercised in January 1295, after only five months and eight days in office. In the formal instrument of renunciation, he recited as the causes moving him to the step: "The desire for humility, for a purer life, for a stainless conscience, the deficiencies of his own physical strength, his ignorance, the perverseness of the people, his longing for the tranquility of his former life". Having divested himself of every outward symbol of papal dignity, he retired to his old solitude.

However, the former Celestine, Pietro Angelerio, was not allowed to remain in solitude. Because certain parties had reason to worry that some might install Pietro as antipope, the next pope ordered Pietro to be brought to Rome. Pietro escaped and hid but eventually was captured and imprisoned in Ferentino, where he died after 10 months on 19 May 1296. Pietro was buried at Ferentino, but his body was subsequently removed to the Basilica Santa Maria di Collemaggio in Aquila. 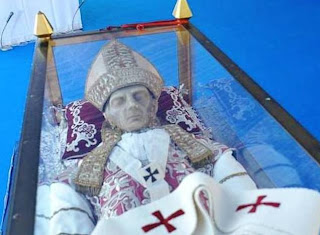 Celestine V was the first pope to formalize the resignation process and is often said to have been the first to resign. In fact he was preceded in this by Benedict IX (1045) and Gregory VI (1046).


A 1966 visit by Pope Paul VI to Celestine's place of death in Ferentino along with his speech in homage of Celestine prompted speculation that the pontiff was considering retirement. A similar visit by pope Benedict XVI on 28th April 2009, where he left on Celestine’s casket the long pallium with which he had been invested in 2005, was indeed followed by his abdication on February 28, 2013.